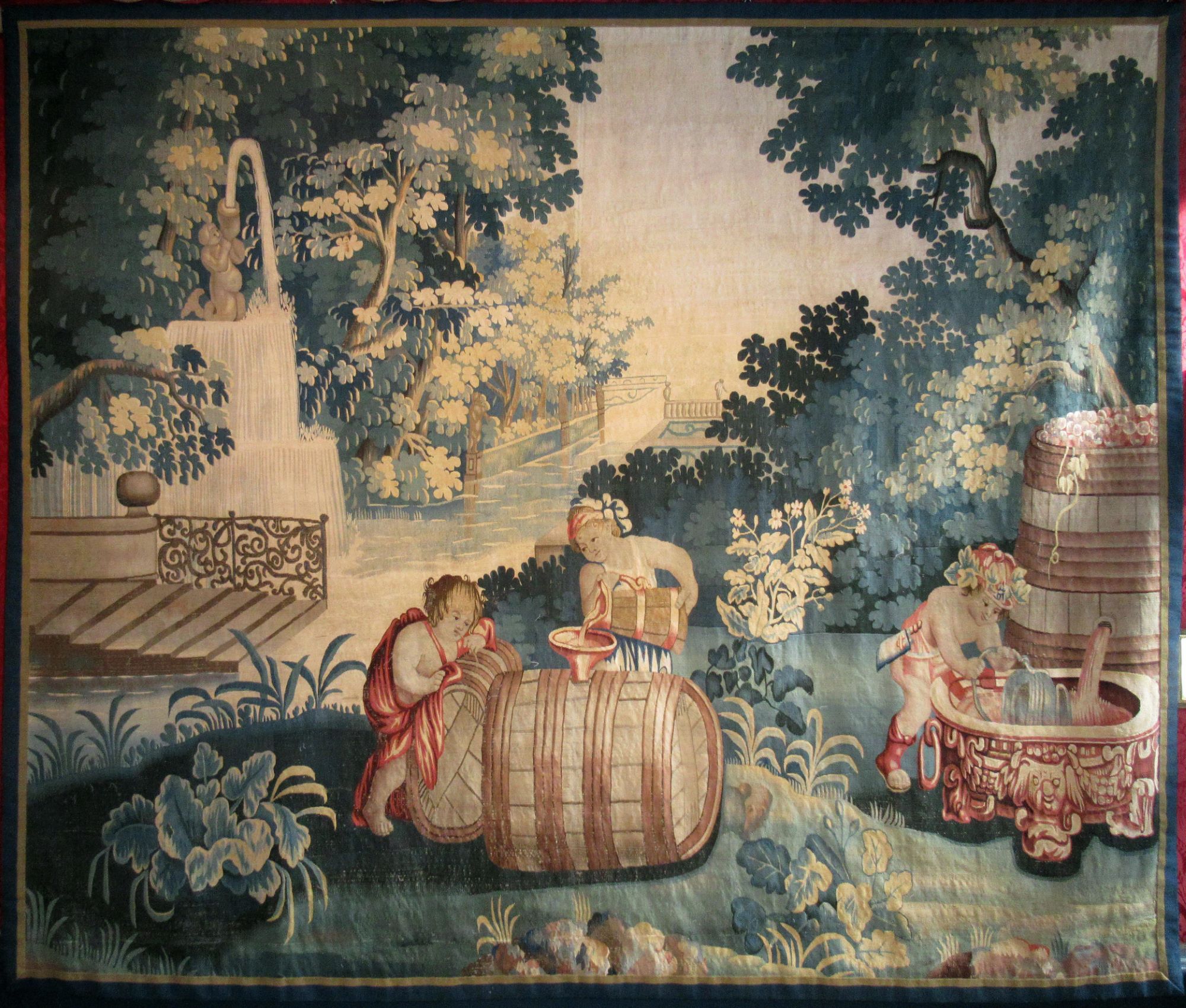 London or Antwerp
Circa 1670-1690
This tapestry is closely related to the set of 'Bacchanals' hanging at Cotehele (http://www.nationaltrustcollections.org.uk/object/348253), of which Helen Wyld, then Tapestry Curator for the National Trust and now Senior Curator at National Museums Scotland, wrote…

The entry goes on to note that in the Punch Room at Cotehele "...the remains of at least two different weavings of the 'Bacchanals' can be distinguished…", and that on tapestries belonging to the set with acanthus-leaf borders there remains the mark of "…a red cross on a white shield, first used at the Mortlake tapestry manufactory and adopted by other workshops operating in and around London in the late seventeenth century..."

The subject is derived from Italian tapestries woven in the 1540s, based on frescoes by Giulio Romano at the Palazzo del Te in Mantua. The winged children of the frescoes were engraved in Germany in 1529 and it was probably from these engravings, which omitted the wings, that the weavers drew their inspiration for a group of tapestries generally known as the 'Naked Boys'. The original adaptation of the subject for use at Mortlake is attributed to Francis Cleyn, but the theme was much copied, altered and adjusted during subsequent weavings. The first record of 'Bacchanals' being woven in England appears after Cleyn's death, as Helen Wyld continues "…in the accounts of the Lord Chamberlain in 1668, when the Royal Arras Worker Francis Poyntz was paid the large sum of £497 5s 0d "For one Riche Suite of hangings called The Bacchinalls […] being the first made after the Designe" (Thomson 1973, p. 355). Later inventories suggest that Poyntz supplied at least two sets of 'Bacchanals' to the crown (ibid. pp. 364, 368), and he was almost certainly responsible for a set of 'Bacchanals' recorded in the 1675 inventory of the Duke of Ormond at Dunmore, an inventory which included a number of other tapestry subjects that Poyntz is known to have produced (ibid., p. 355). Two 'Bacchanal' tapestries with the signature of Thomas Poyntz, who took over some of Francis's cartoons on his death in 1684, were with the London dealer E H Benjamin in 1934 (Göbel 1934, vol. II, figs. 147a, b; Hefford 2010, p. 252)."

Wendy Hefford, the former Curator and Research fellow at the V & A with responsibility for textiles and tapestries, has postulated that some weavings of the 'Bacchanals', such as the set at Boughton House, which are similar to the Cotehele hangings but with the designs reversed, may be Flemish. Certainly, similar tapestries are known to have been woven in Antwerp in the late seventeenth century.

We will get back to you soon