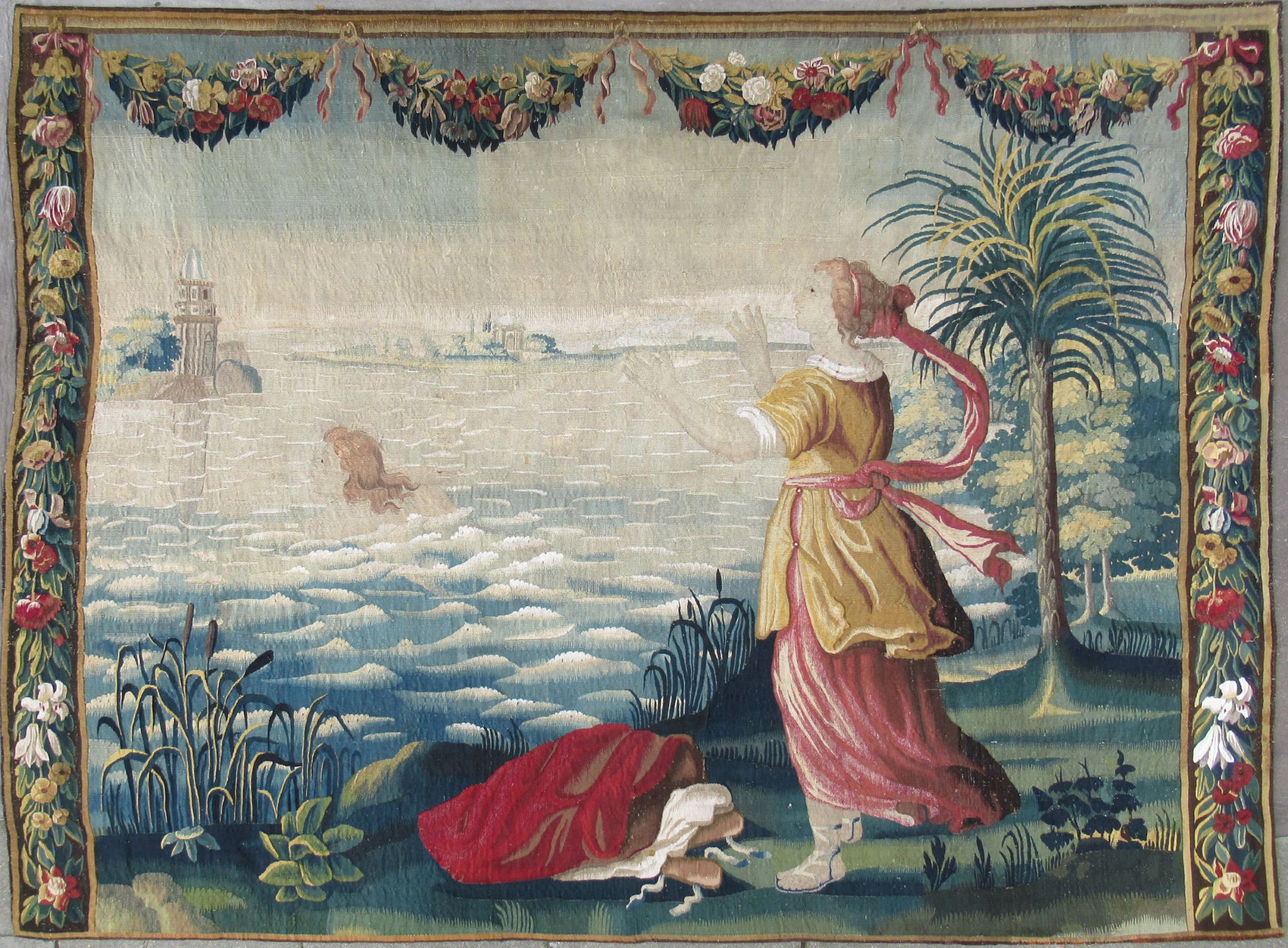 A Soho tapestry
Leander swimming the Hellespont to meet Hero
England, last quarter of the 17th century
In silk and wool
After the design by Francis Cleyn (1582-1658)
From the set of seven tapestries illustrating "The Story of Hero and Leander".
Excellent condition
P.O.A.

Leander, a youth from Abydos, a town on the Asian shore of the Hellespont, would swim across the waters at night to Sestos on the opposite Greek shore to meet his lover Hero, a priestess of Aphrodite who dwelt there, guided by a lamp that she would light at the top of her tower. One stormy winter night, the waves overcame Leander and the breezes blew out Hero's lamp. Leander lost his way and was drowned and she, in despair, threw herself into the sea.

Francis Cleyn supplied the designs for this series to the Mortlake manufactory as his first submissions in the late 1630s and early 1640s. These designs were strongly influenced by the Italian school, where the German-born artist had trained prior to working at the Danish court. He was called to London by Charles I in 1624, where he remained until his death. The designs for Hero and Leander continued to be used by Mortlake, and it was to be the workshop's most popular series throughout the 17th century, afterwards reproduced by the private workshops in Soho and Lambeth. At least three sets were woven for the king in the late 1620s and 1630s, and at least two were given as diplomatic gifts (Hefford 2007, pp. 190-195).

The story, also the subject of two of the Heroides of Ovid, ultimately derives from a poem of the 6th century BC, purportedly by Musaeus Grammaticus. The relevant lines are given here in the 17th century translation of Sir Robert Stapleton "Erotopaignion- The loves of Hero and Leander: a Greeke poem".

Then his faire limbs he stript with both his hands,
Turbanded with his silken robe his head,
Leapt from the shoare, o'th' waves his body spread,
And up against the flaming torch still bore,
Himselfe the ship, the pilot, and the Oare.
On her high turret Hero watcht the flame,
And as stiffe gales from any quarter came,
Still screen'd it with the sacred robe she wore,
Till tir'd Leander reacht the Sestian shore.

But a more direct influence on the designs for the tapestries was Christopher Marlowe's "Hero and Leander", and its conclusion by George Chapman, published in 1598. This scene depicts these lines from Chapman's Sixth Sestiad.

His sister was with him; to whom he show'd
His guide by sea, and said, "Oft have you view'd
In one heaven many stars, but never yet
In one star many heavens till now were met.
See, lovely sister! see, now Hero shines,
No heaven but her appears; each star repines,
And all are clad in clouds, as if they mourn'd
To be by influence of earth out-burn'd.
Yet doth she shine, and teacheth Virtue's train
Still to be constant in hell's blackest reign,
Though even the gods themselves do so entreat them
As they did hate, and earth as she would eat them."
Off went his silken robe, and in he leapt,
Whom the kind waves so licorously cleapt,
Thickening for haste, one in another, so,
To kiss his skin, that he might almost go
To Hero's tower, had that kind minute lasted.
This Soho version has particular affinities (including the use of the same border design) with the three Mortlake hangings at Cotehele, Cornwall (NT 348324), dated to 1660-1690. Helen Wyld, in her cataloguing of the three, describes the sequence of the set thus:
"…their meeting is the subject of the first tapestry in the series, which does not survive at Cotehele. The second tapestry, which again does not survive at Cotehele, shows Leander setting off to swim the Hellespont to meet Hero at her tower on the opposite shore…" [the subject of the present tapestry] "... His sister Hermione stands on the shore wringing her hands as she watches him depart, his pile of clothes on the ground beside her. The next scene, which does survive at Cotehele (348324.2), shows Leander arriving at Hero's tower. After returning from his first visit to Hero Leander confided in his parents and obtained their blessing to marry Hero, the subject of the fourth tapestry (348324.1). The fifth tapestry, which does not survive at Cotehele, shows Leander about to swim the Hellespont one last time, by night: he strides into the water, again watched by the anxious Hermione. Hero had vowed to keep a light burning in her tower to guide him but the light was extinguished in a storm, which killed Leander, and the final tapestry in the series shows Leander's dead body washed up on the shore at Sestos and the distraught Hero dying of despair (348324.3)."
The Cotehele tapestries each have the mark of a red cross of St George on a white shield to the outer border, a mark previously used exclusively by the Mortlake manufactory, but which, by the time of their weaving, was also used by some of the newer London workshops. Wyld continues…
"Many of these small workshops also used Mortlake designs (see for example Finch 1907), and although the 'Hero and Leander' set at Cotehele was probably woven at Mortlake, it is possible that it was made at one of these smaller workshops. A series of letters written in 1670 by Sir Sackville Crow, who had been Director at Mortlake from 1662-67 but was now in the Debtor's Prison of the Fleet, reveals the continued popularity of the 'Hero and Leander' series. Asked by the Countess of Rutland to advise her on commissioning a set of tapestries, he noted that 'Hero and Leander' was one of only six designs in England worth weaving, and warned that "[From] whomsoever I doubt you will hardly get Hero made under 25s. per ell, to be well done", mentioning two other workshops that could weave the tapestries". "

We will get back to you soon